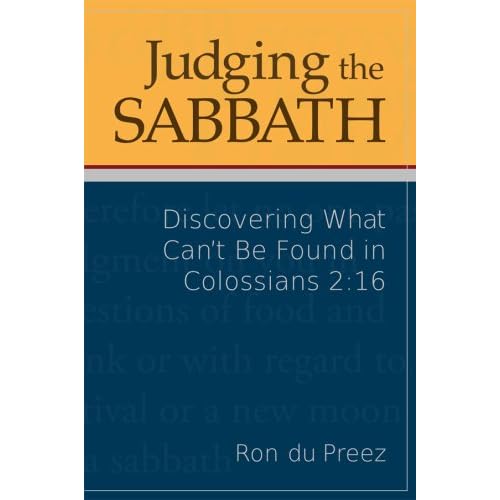 Have you ever had questions or doubts about how to best deal with Colossians 2:16 “Therefore do not let anyone judge you by what you eat or drink, or with regard to a religious festival, a New Moon celebration or a Sabbath day” (NIV)?

In a thorough but engaging way, du Preez helps the reader sort through scores of interpretations, commentaries, ideas of the “Colossian heresy”, the claim of a yearly-monthly-weekly sequence, the use of the words “feast” and “shadow” in Scripture, etc.

But the clincher is his careful and fair analysis of every single instance the word “Sabbath” is used in the original Hebrew and Greek (including the LXX). Amazingly enough, every time a Bible writer in the Old Testament or the New Testament used the word “Sabbath” to mean the weekly Sabbath given at creation he always surrounded it or clustered it with other words such as “keep”, “the Sabbath”, “Sabbath day“, “holy” etc. in the original language. On the other hand there are different, but consistent, verbal markers that indicate ceremonial sabbaths throughout both testaments, such as “your sabbath” or her sabbath”.

Rather than just trying to defend a particular interpretation or perspective du Preez uncovers the real meaning of Colossians 2 through an analysis of its chiastic structure and comparison to Hosea 2:11, which it appears Paul is quoting. Though scholarly, I found this to be an enjoyable read and was well rewarded for the time spent.

From now on I know how to respond in a simple and Biblical way if someone asks about Colossians 2:16. And as an added bonus, next time someone tells me the feast days are still mandatory I will share with them the insights I gained from Hosea 2:11 and Colossians 2:16.